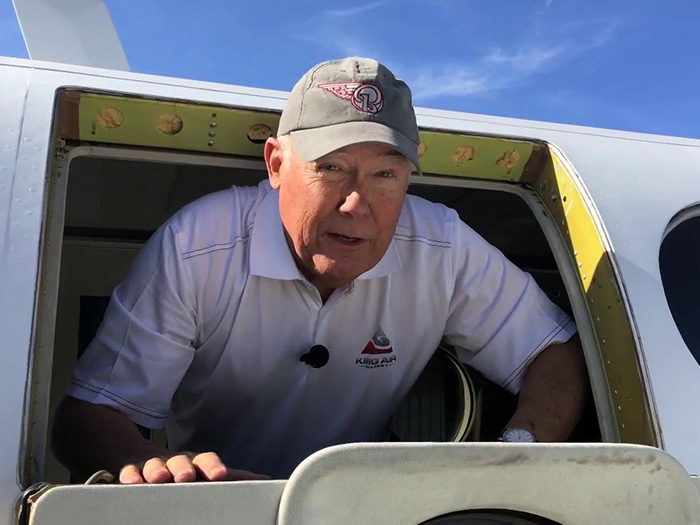 Note: The following analysis was written by Tom Clements and submitted to Stevens Aerospace. We’re grateful to Tom for a lifetime of experience and insight in the aviation industry.

I have been recently asked (February, 2020) to provide my thoughts on the Raisbeck Enhanced Performance Leading Edges (EPLEs) and I am happy to do so.

First, a little history. Back in the 1960s, as some old-timers may remember, the Robertson STOL Company was developing improved short field performance modifications for many airplanes.

Design of the Super King Air 200 was taking place at this time – late 1960s, early 1970s – and although it had a 50-inch wider center section than previous King Airs, the drooped leading edges were included in the design. But, perhaps due to the higher cruise speeds of the 200 along with the increased span of the center section, it was determined that the droop was actually having a detrimental effect. Namely, the droop – at cruise angles of attack – was causing the wing center section to provide “negative lift.” By that I mean that the inboard wing sections were producing less lift than the outboard sections, becoming more pronounced as speed was increased. Only when the angle of attack was strongly positive, as in slow flight, did the droop work as desired.

The center section providing this lower lift component in cruise meant that the wing outboard of the nacelle had to provide lift not only to balance the weight of the airplane but also to overcome the loss of lift from the center section. The engineers raised concern about the long-term affect this might have on the wing attachment mechanisms. By now, however, the design was finalized and the redesigning and building of a new center section leading edge would have delayed the program too long.

The “fix” was to change the specification of the aileron rigging, to make both ailerons, in neutral, have their trailing edges a small degree higher. This caused the effective angle-of-attack of the outboard wing to be reduced and forced more lift to be generated inboard.

This slight aileron adjustment caused a minor problem: The test pilots reported a degradation of the outstanding aileron “feel” that was exhibited prior to the adjustment. The fix to this complaint was the installation of a very small triangular strip affixed to the bottom wing skin just in front of the aileron’s inboard end. This strip “tripped” the boundary layer flow such that it better attached to the slightly raised aileron’s bottom surface. Here’s a picture: 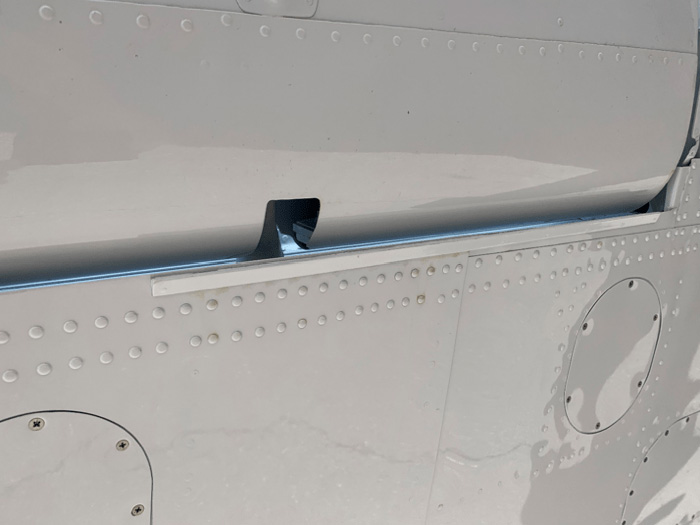 It’s likely you had not even noticed these before. Right?

The 200’s more powerful brother – the 300 – was first sold in 1984 following its development in the late 70s and early 80s. Raisbeck’s streamlined inboard leading edge was certified and being delivered in 1982. Now the engineers were given the OK to modify the center section leading edge to remove the droop. At the same time, they made the leading edge – the portion forward of the main spar – with a slightly deeper chord, adding some wing area to handle the 1,500 pounds extra weight for which the 300 was being certified. The aileron rigging specifications were changed back to what they had been originally on the 200 prototypes and the triangular strip was no longer needed so it was eliminated. Even the most recent King Air 250s of 2020? No, they still have the original 200 drooped inboard wing’s aerodynamic design. (But with winglets, of course.)

James Raisbeck – who had worked for Robertson STOL in his younger days – was aware of the “negative lift” of the 200’s center section and even before Beech came out with the 300 he redesigned the leading edge to both eliminate the droop as well as to promote increased airflow across the air-to-air heat exchangers mounted there. No aileron re-rigging was made. Surprisingly, the stall speeds at all flap settings were reduced by several knots, owing to better stall characteristics. This, in turn, contributed to the greatly improved FAA-approved takeoff and landing distances of the King Air 200/250-series when equipped with Raisbeck’s EPIC Performance Package which, of course, includes the undrooped inboard leading edge.

In my opinion, there are two reasons that the EPLEs are a modification that I would like to have on any of the 200/250-series airplanes that I operate. First, it gives me a bit of peace-of-mind knowing that the attach points of the outboard wing do not have to work as hard since the negative lift has been reduced or eliminated. Second, the fact that the absolutely superb takeoff performance charts that were the outcome of an extensive flight test program the Raisbeck Company conducted in accordance with the latest FAA Part 25 “Big Airplane” standards only applies to members of the 200/250-series that have the entire EPIC package installed. The popular and impressive Quiet Turbofan or Swept-Blade propellers, the RARS and DABS (Ram Air Recovery System; Dual Aft Body Strakes) kits, by themselves, do not open the door to the use of the improved data. Only with the complete package can 200 operators finally have true “Balanced Field Length” data available. The standard factory takeoff charts, sadly, are based on flawed, out-of-date, thinking. For a complete discussion of this, see my article “The Maddening Story of BE-200 Takeoff Data.” (Search for it at BeechTalk.com)

My belief is that it is misguided to have the Raisbeck props, strakes, and ram air recovery systems added without also adding the EPLEs. Wing Lockers? They are so very, very, useful that I would want them, too…although they are not required to get the performance enhancements.

Be sure to keep up with the latest service bulletins and letters available in our documents section.
Scroll to top